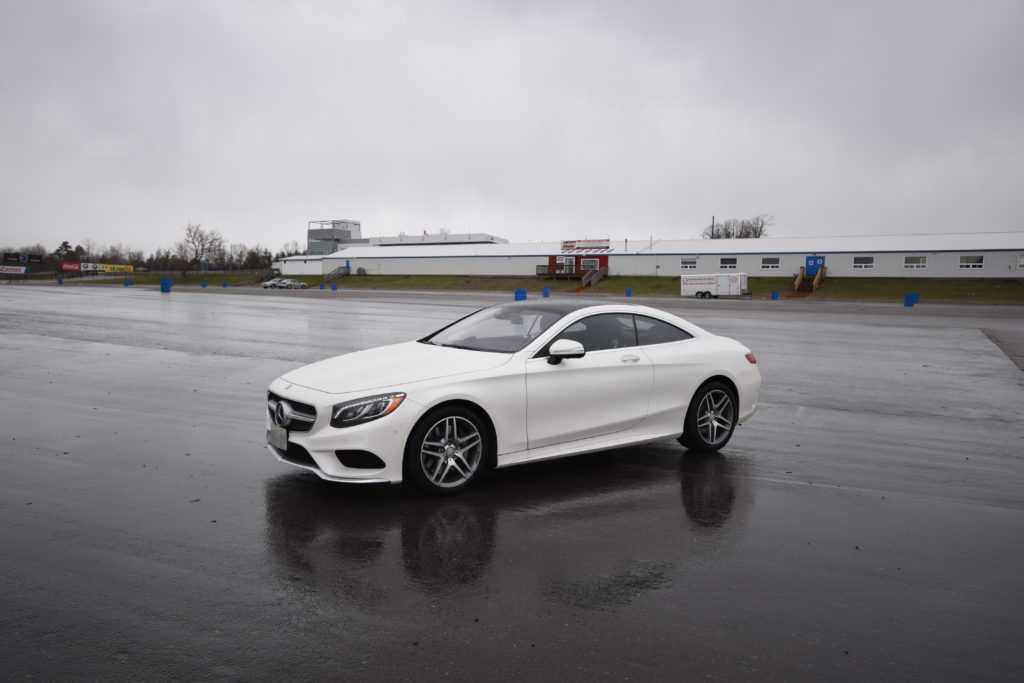 Incorporating design touches, branding, materials, interfaces and even scents inspired by the latest in luxury furniture, fashion, accessories and electronics, the Mercedes S550 Coupe is designed, styled and equipped for the brand-conscious luxury shopper after flagship sedan amenities in a more striking and personal two-door package.

The S550 Coupe is the two-door version of the flagship luxury brand’s flagship luxury sedan. Turning the enormous sedan into an enormous coupe enables the use of even more daring angles and lines, and generates a more expressive and unique presence on the road. It’s a rolling showcase of luxury cross-branding with Burmester and Swarovski, as well as a showcase of next-generation luxury and safety technology.

Through the tuning of the steering, suspension, throttle and transmission, engineers have created a unique ride and handling character, with immediacy to the S550 Coupe’s controls exceeding expectations given its size, and the creamy-smooth feel enabled by the AIRMATIC suspension, which sees the S550 Coupe virtually hovering over smooth highways.

This big two-door feels like it weighs ten tons while cruising with a remarkable density and velvety ride, though it seems to shed most of its weight when asked to steer, brake or accelerate. The responses to steering, throttle and braking inputs are powerful, instant and pleasing, almost in spite of its absolutely serene ride.

The engine is noteworthy, too. Like the handling and steering reflexes, it’s tuned for tranquility that gives way to a potent response when requested. The S550 achieves ignition with a burbling bark, and handles gentle driving with absolute smoothness, and little more than a muted rumble from under the hood. Opened up a little, or a lot, sounds from the throbbing V8 flood the cabin proudly. The exhaust note is thick and the engine is far from whisper-quiet, but sounds absolutely gorgeous while delivering full-throttle acceleration that borders on excessive.

Drivers after a machine tuned for tranquil cruising and pleasing performance reflexes with no compromise will love the the S550 Coupe’s ability to switch seamlessly between a posh cruiser and a luxury hot-rod on demand. Note that the optional 21-inch wheels do generate some abrupt sensations on badly broken pavement.

Entry and exit to the rear seating area is enhanced by motorized front seats which tuck out of the way in a second or two, and the rear seat quarters in the big coupe are heated, pillowy and comfortable. There’s room for full-sized adults in back, as needed, though spaciousness is adequate and not generous.

Up front, drivers are surrounded by space galore, and a world of glossy wood, soft leather, and numerous high-tech interfaces, including a console-mounted touch-pad, and a fully digital instrument cluster that flows into the central display screen like a gigantic iPad.

High-end covetables abound, including climate controlled seats, a heated steering wheel, heatable door arm-rests and centre console lid, powered self-sealing doors and special levers which hand you your seatbelt, so you don’t have to reach. The Burmester stereo system is bright, vibrant, and packs subwoofer firepower that’ll blow the teeth out of your face, if you’re so inclined.

Calling in elements commonly encountered in the owner’s luxury lifestyle is the name of the game here. Navigation and audio controls accept pinch, expand and swipe gestures like a Smartphone, ambient lighting color and brightness can be configured to match the after-dark ambiance of one’s favorite restaurant or club, and the massaging front seats rival the massage chairs you’ll find at your favorite gym.

The stitching and leather and metal trim dispatched throughout the cabin wouldn’t look out of place on a high-end watch or Prada handbag, and the tester’s headlights included optional Swarovski crystal inserts on their LEDs for a delightful lighting signature after dark. That’s a $4,500 option. There’s even a glovebox-mounted scent capsule activated via the climate control, ensuring the cabin always smells like the lobby of the Shangri La.

Advanced safety and hazard detection systems abound, too. Using radar, cameras, lasers and even infrared lighting, the S550 is capable of analyzing and understanding its surroundings at all times. Warnings engage if you’re at an increased risk of a forward collision, the S550 can park itself, hands free, and the self-adjusting cruise control works at all speeds, even right down to a stop-and-go crawl, with absolute smoothness.

Few cars match the S550 in terms of lavish luxury and exclusive flagship coupe factor, as well as advanced high-tech that’s remarkably futuristic. Here’s a big-dollar car that looks, feels and acts, at every opportunity, like a big-dollar car should.

End of the day, those with big wallets after a flagship level luxury coupe with simply lavish and next-generation features will find the S550 Coupe has few, if any, rivals on this side of a Bentley or Rolls Royce. That makes the tester’s $160,000 price tag a bit of a deal, for the right shopper.

What's Not Big wheels can reduce ride quality on some surfaces, rear seat room is adequate, not generous, learning curve to many controls