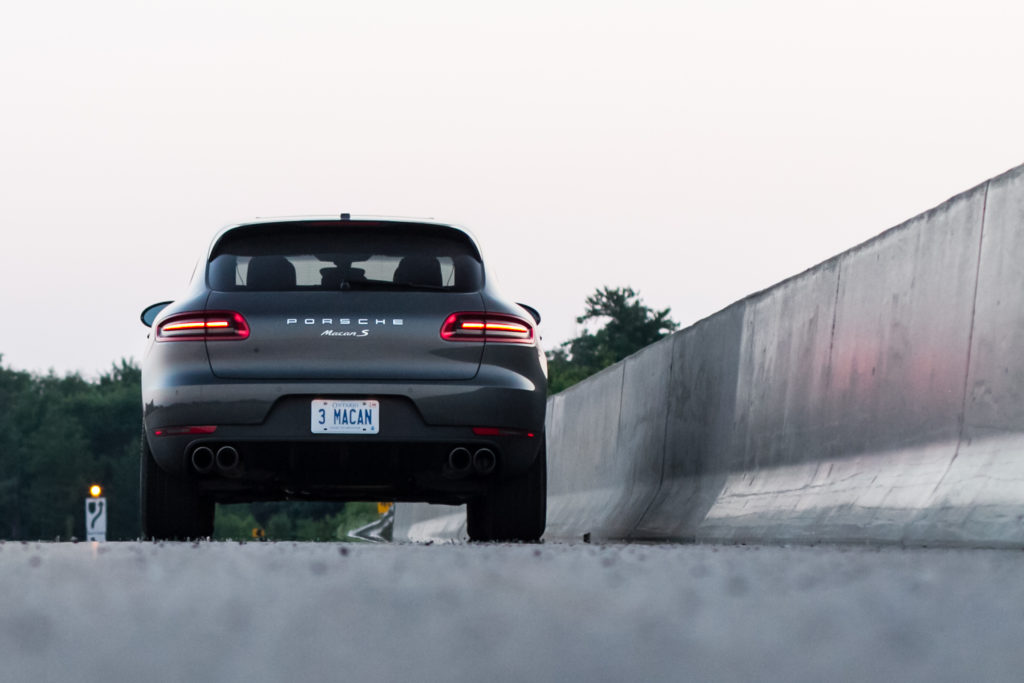 If reviews from owners and experts are any indication, the Porsche Macan is a seriously well-balanced package. Although, for the money, one could find a crossover ute that was bigger, or faster, or more off-road capable, or one with a higher towing capacity, as an overall sporty premium-ute package, the Macan is a compelling product. For what most shoppers want from their sporty little premium ute, most of the time, the Macan hits the mark.

It feels like a Porsche. The 7-speed PDK transmission shifts in fractions of a second with beautiful rev-matching in both directions. The 3-litre twin-turbo V6 sounds gorgeous, floods the cabin with rich, blurty exhaust noises, and flings the Macan along in a serious 340-horsepower rush.

And the handling? Visiting a racing course in the summer revealed Macan’s composure and stability at high speeds. Body-roll occurs as you dial in a steering input around a bend, after which point the Macan takes a set, stays flat, and flings itself around. That’s backed by a steering that’s heavy but quick—which is to say, confidently mischievous.

It feels locked on and stable and surefooted when driven hard, and push really hard, and you’re treated to limits that can be explored with a grin and a giggle. Really give it some heck, and Macan loves to slip and squirm and shift on its contact patches as you adjust its angle via the steering and throttle and brakes.

Those brakes, even after numerous hot laps, exhibit negligible fade, and even the engine coolant and oil temperatures barely go up 3 degrees in the process. And though you probably won’t drive your Macan on a race track, the track-bred durability and prowess at handling severe driving conditions can be useful to a crossover owner that’s, say, hauling a heavy trailer on hilly terrain.

I’ve just had another shot at the Macan, taking the tester home for a second time, now in the dead of winter.

Wearing a set of Pirelli Scorpion Winter tires to generate more grip for Macan’s rear-biased AWD system, the winter driving character to the machine is apparent from even a quick spin in the snow.

The AWD and Porsche Stability Management (PSM) systems work in seamless sync. Macan, in most situations, tries hard and often effectively to find traction via some power redistribution in the AWD system, rather than by cutting power and adding brakes. There’s even a slick torque-vectoring system in the rear differential that mechanically over-drives the outside rear wheel in hard cornering, helping the Macan turn, in addition to your steering inputs. This makes it feel even livelier.

And that’s the core of the frisky feel you’ll find here. And part of the reason the Macan maintains its connection with the enthusiast driver, even in the winter. Where some crossovers are tuned and calibrated to feel as clamped-down, locked on and bolted to slippery roads as tightly as possible, the Macan prefers to dance around a little. It takes little in the snow to get a playful, squirmy, tail-happy and active dynamic going on.

The relatively high-up driving position sits nicely between ‘confident view of the road ahead’ and ‘car-like enough that you don’t feel like you’re driving a tank’. The steering balances its quick ratio and heavy effort well, making it easy to keep the Macan stable on its line when you’re driving at speed, carefully, on a snow-covered highway.

And, as it is on the track, on bare highways and anywhere else, Macan is one of those machines that talks to you. You feel the wheels losing traction as it happens. Drivers who prefer to be informed by their vehicle, and involved actively in what’s happening between the tires and the road, will love it. Those after a crossover with an inflated feel of weight and heaviness for added winter confidence may not. It’s a driving enthusiasts dream.

Truly, thanks to proven Porsche technologies and the authentic athleticism dialed into the thing, Macan might be the best value on the road in a sports crossover today—and it loses nothing moving from summer to winter.

Mind you, a few compromises are posed. Up-level features are applied sparingly to the standard equipment list, and I was particularly disappointed at the lack of a performance xenon lighting system at this price point.

Macan isn’t a big crossover either: it’ll haul two couples off for a weekend road trip, or to the slopes, with ease—though the cargo space loses some space towards the ceiling (thank the steeply-raked tailgate), and front seat space is adequate, not generous. It’s a sporty snugness, not tight for your 5’11, 220 lb driver, but not a machine you’ll likely be stretching out in.

Starting at $54,300, this Macan is the entry-point to the Porsche brand. For shoppers holding an authentic, world-class performance driving experience as a higher priority than generous feature content, the Macan S should be considered a priority test-drive.

What's Not Standard halogen lighting is adequate at best, gets pricey with options